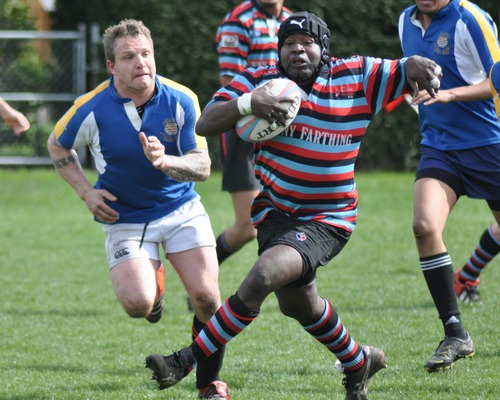 2014’s first Unsung Hero, on the field, needs little introduction – a warrior, respected by friend and foe, a leader and friend, Roger Robinson.  In a season when Roggie probably would have preferred to focus on coaching, he has answered the bell on a number of occasions to don the cleats and “get out there”! Roger, who refuses to admit an age (“let’s just say; I’m getting old”), leads a “full on” life – father of two lovely girls, he also is part owner and general manager of Touch Lounge.

When asked to “tell us a little about your early involvement with rugby”, Roger related the following.  “My home town is Pickering, Ontario however I have lived in Victoria long enough now, that I suppose I have become a west coaster.  I went to Dunbarton High School where I started playing rugby at fifteen. Roger was happy to tell us that Dunbarton will be touring to Victoria in April.  After H.S., Rog played with Ajax Wanderers before making the trek to the west coast and linking up with the Castaways which evolved to OBC and Castaway Wanderers, his playing career covering a span of twenty years.

CW: What is your favorite position?  RR: “I have been known to appear at prop and flanker!  I have played #10, wing and outside center but I think inside center is my real position”. He adds with his customary grin,” Probably I should have been a hooker.”

CW: Who has had the greatest influence on your rugby career?  RR: “Some may be shocked but first and foremost would be my brother, Spencer.  We are very much alike although people don’t really see that.  When we are in coach mode, we discuss different approaches and strategies.  We are both very competitive and intense and don’t like losing. Sometimes people may not see that aspect of me but if I did not have it, I probably would not be involved in rugby today.  Secondly, I recognize all of the coaches I’ve had since grade school have molded me in some way, not just with rugby but also with life skills.”

CW: Roger, with such a long and illustrious rugby career, can you share some of the highlights?  RR: “I have been blessed with a lot of highlights in my career and I will share just a few, in no particular order.  Playing with Spencer at club and Crimson Tide levels; winning three B.C. Premier Championships and one First Div Ceili’s Cup; playing on four Crimson Tide Super League Championship teams; club and Super League captaincy are some of the highlights. He modestly downplays his National team ‘cap’, almost as an afterthought, although when questioned, he holds that equal to his other achievements.  Roger took the field in a win over Hong Kong in 1998, 38 – 12 and although he travelled with team Canada, unluckily did not get another cap. Watching the kids I’ve coached go on to play club rugby and some even representing our beautiful country, Canada, has also been a highlight.  I can’t remember all of the Championships that our junior teams have won, along with whoever I have been coaching with but I plan on striving to coach more!

RR: “I’ve never really thought about it, it seems like the natural thing to do.  I guess’ thinking about it, when I was young, all of the older guys at Ajax and at Castaways mentored us; there was a sense of family, loyalty and trust and honor to each other.  Rugby to me is a way of life in every aspect, on and off the field.  Hopefully, that’s what I can teach kids, some of the good values that my parents and rugby have taught me.  For example, the value of winning is important – striving to win and improving at all times are very important values which also apply to life.  Hopefully, I can model some of the many lessons I have learned through rugby and players that I coach will strive to be outstanding citizens and further themselves in whatever path they may choose.  My immediate future is to keep coaching…..not too sure after that but CW will always be part of my life.”  This truly depicts Roger, the man. ‘onya, Roger!