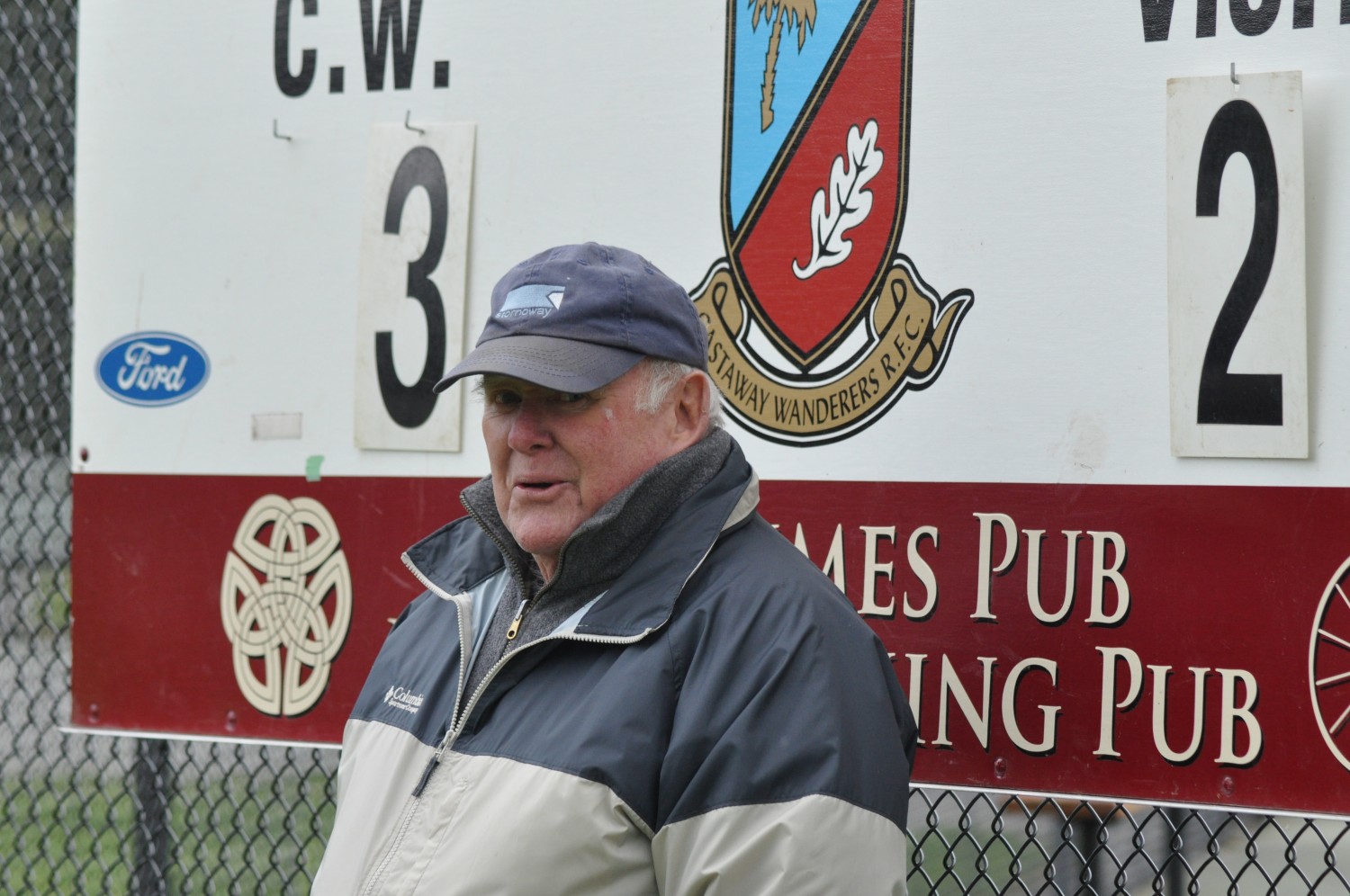 CWRFC would like to recognise a long-time volunteer and supporter, Hugh Creighton. Every rugby club needs specific volunteers, be it with field set-up, take-down, “gate” greeters/collectors, field liners etc., etc., if it is to present as a “slick” outfit. One of these areas is; to offer an accurate score on a visible scoreboard (constructed by another volunteer!), to all fans, rain, hail or shine. For CW Rugby, that man is Hugh Creighton.

CW: Hugh, you have been retired for some time. What was your work career and how long were you employed at this job?
HC: I worked for United Way in London, Ont., for twelve years, then I came to Victoria as Executive Director for three years. I transferred to property management and eventually established my own firm which I managed for some twenty-eight years. Since retiring, I have tried to make travel my “job”, when and where possible!

CW: Hugh, just how long have you volunteered this service for The Tricolours? We suspect you go back before the “amalgamation” with your connection with the Wanderers. When and how did you get involved with rugby at Oak Bay?
HC: I did not play rugby until after H.S. and I played for Oak Bay Wanderers from 1956 – 1961 when my work commitments took over my time – studying for a Chartered Accountant’s degree, marrying and raising a son and daughter left no time for rugby.

CW: To be interested in rugby, usually one has to have played the game. Is this the case for you? If so, when did you start playing? Where? What position? IF NOT, why have you become so interested in your support for rugby?
HC: My position was prop where I met some interesting chaps from James Bay however, people like Dick Ellis and Peter Clarke (both former Presidents of the CRU and OBW), really impressed me with their commitment to the game. Although I could not find time to train and play, I was able to volunteer on the OBWRFC Board, working with Doug Grey. I also worked closely with Jim Grier during the days of “amalgamation”.

CW: Hugh, not only do you religiously appear week in and out for home games, rain, hail or shine but you and your wife Val, have been regulars at Happy Hour at The Temple for many moons. There must be something special about this connection. What is it?
HC: The friendships are great and the beer is cheap!!

CW: After all these years and many games, there must be some assessment you have of CW rugby. Firstly, who has been your favourite player you have watched over the years? Secondly, what is your assessment of rugby at Windsor, standard of play etc.?
HC: I have seen many great players and to pick one would be unfair. One only needs to check out the Honour Board at the club to see what I mean. I think the best years at the club were when Dennis Carson and Brent Johnston led the way. In today’s game, budgets have soared and player availability – due to National program demands has really impacted rugby at the club level, seemingly, Island clubs in particular. I have enjoyed watching the efforts of the guys during the recent lean seasons. This last season I have really enjoyed watching the new women’s program and the “moxie” they have brought to the game.

CW: Hugh, you have been a great servant of the game, particularly for our club. In conclusion, just what has been the reason for you staying involved as long as you have?
HC: I am bored stiff with baseball, basketball and hockey, despite the fact that I have two grandsons playing in the BCJHL. I enjoy the fact that rugby is one of the only games that does not take three to four hours to play! On a good afternoon we can get all three games in between 11:30 and 4:15 …. Rain or shine!

Hugh is too modest to tell his age but let us say that for a man of his age to be still “doing it”, so faithful in all weather for our club, his service must be respected and appreciated. Next time you see Hugh at Happy Hour, buy him a pint! Thanks for your time to answer these questions, Hugh and thanks for your volunteer service. May you and Val have many more years of good health and enjoyment of life.

BC BEARS VS ENGLISH COUNTIES