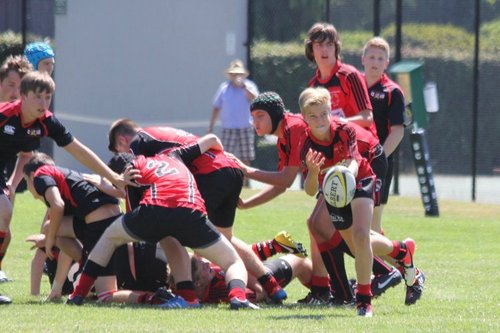 Pictured, firing one from the base of the ruck is CW U15 player, Braydon Tate.

In splendid sunshine yesterday Victoria's Spring Tide teams at the U15 and U17 levels gave visiting West Monmouth School from Pontypool, Wales a rugby clinic, winning both games by a wide margin.  The matches were fiercely contended, as would be expected with a team from Pontypool, home of the ferocious front three of Faulkner, Price & Windsor of Welsh and British Lions fame of the late 70's.

The tourists had come to Victoria from Washington State where they had played games against Seattle and Old Puget Sound.  The games were well officiated by John De Goede and Kevin Smith, hosting and billeting led by CW's Don Swainson and coaching by Doug Tate and Shane Muldrew in the lead roles.  The combinations of CW and Velox lads in these two teams was melded for the common good.  Many of the lads had recently played together at the BCRU PRC's and their combination showed.

It was a high level of skill and entertaining rugby that was on display.  The structure, use of ball to speedy "outside men", successes at the breakdown, depth of support and handling skills were all highlights.  Vancouver Island was on show for all the best that is representative of our rugby community and brought to mind days of yonks ago when teams travelled for enhancement of their playing styles and commraderie.

Kudos to all involved, particularly the families who billeted.  It should be a long and lasting memory for the Welsh visitors.  For those ex-pats who can cast memories to the 70's - here's one for you!