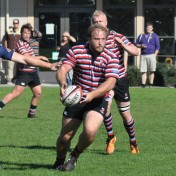 On paper, the hosts appeared as underdogs but on the day, every player did his job, confidently and competently, providing a win of good value. The highlight was a team commitment to defense. CW opened the scoring with a penalty and the contest went twenty minutes before the first tally after a nice break from Morris, a quick feed from the breakdown to Thornber who cleverly “froze” the defense before springing Kehoe for the try. (10 – 0). Shortly after, Oliver slid a clever grubber as the defense closed and Armstrong took the bounce and fed Morris for #2. (17 – 0). James Bay forwards asserted some pressure and were held until the fifth recycle when Taylor Dalziel ran an unstoppable, quality line to bring the score to 17 – 7. For the remaining fifteen minutes both teams exchanged field position. James Bay had superiority in the set scrums and CW brought a greater commitment to the breakdown. The curtain closed with James Bay attacking The Tricolors’ line.

With the second half only five minutes old, Mitrou was in, under the posts, following some good runs from Harriman and others for the visitors, 17 – 14. CW came back with territorial advantage for the next ten minutes and got close, only for a “heads up” tap penalty taken by Spencer Dalziel to ease the pressure. Play ensued with James Bay pressing, although there was a noticeable scrumming improvement by the hosts.

CW gave up five successive penalties and eventually, Thornber took the “team yellow”. It could well have been deemed an error that a shot at goal was not taken by the Bays during this spell, motivating the defense to hold. Praise, in particular for one critical set to Doug Hepp during his brief cameo. Against the flow, a diminutive, Sam Rocher pinched a ball in a tackle and started what became one of the most classic tallies scored by CW at Home in recent seasons. From Rocher, the ball went to Oliver who threw a huge dummy and sent Horton on his way. The cover caught Keenan but he fed to Kelly in support, back to Oliver backing up and in the final tackle he fed Horton to cross after a ninety meter “champagne” effort, the result of good support coming from hard work, 24 – 14. This effort buoyed CW and next it was Carnet, Moser and Bratton who broke down the sideline to threaten. With the pressure being maintained, a classic “diagonal” from Rocher found Moser to put the icing on it – a 29 – 14, bonus point win.

In summary, kudos to all. The forwards, led by the experience of Braddock, Daume, Kehoe and Thornber, set the pattern. Highlight memories being Bishop scything the big JBA runners, notably Harriman and De Goede. MacPherson set his backs going with good service and along with the play from Rocher, they arguably, outplayed their opposing halves. Oliver, a small man, contributed both ways and his tackling of a much bigger, Taylor Dalziel was a credit. Morris, Horton and Armstrong were all good value, although two of the three did not finish the game. Moser looked for work during his brief spell and it will be interesting to watch newcomer Kelly, develop. This pundit really only kept an eye on CW players, so not much to add about JBAA’s efforts. Perhaps they may lacked the cohesion we always expect or it may have been upset.

CW opens the CDI season next Saturday when the Thunderbirds visits Windsor. Thanks to the day’s officials, Mossy, Smithy and the “touchies”.