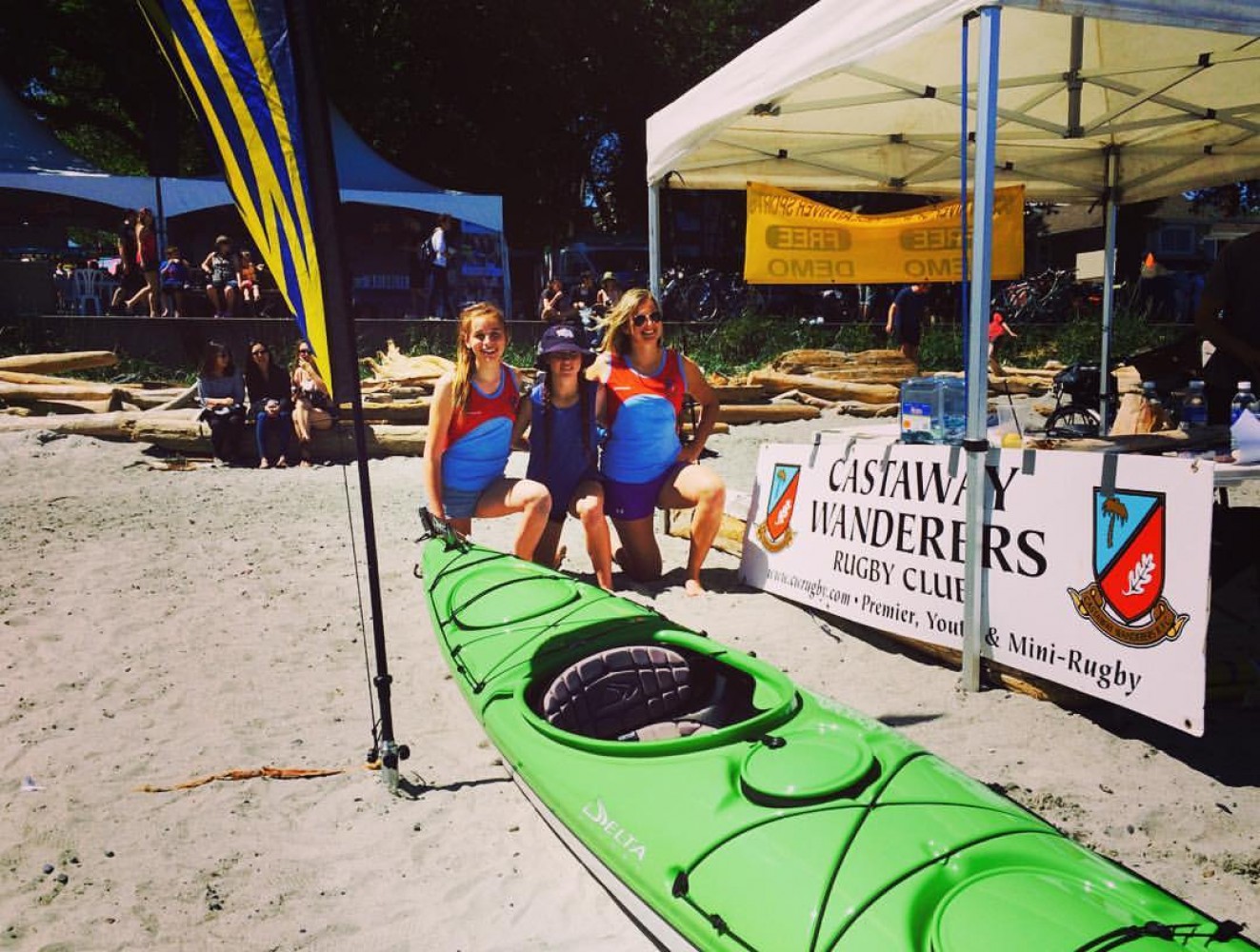 Tip of the Ruggernut’s cap to; Women’s Prem, Marlene Nedved who organized Chloe, Maelle, Adrienne, Amelia and the Knaggs party of four, to volunteer at the Oak Bay Tea Party this past weekend.  This group worked with Ocean River Sport who had a good thing going on this rather warm, summer’s day.  The treat was to hop into a kayak, jump on a SUP or even take in an hour-long, Island Eco Tour from Willows Beach. Participants offered a ‘donation’ to CW Youth Rugby for the experience. This year was very successful in terms of fund-raising, our best ever over the past three years.  Of course, for Ocean River, many people said they would follow up the experience with purchases, trips or rentals in the future.  So, a ‘shout-out’ to all CW types, this is the place to go for your outdoor experience.

Sunday was CW Advance Day.  This meeting is an annual day-long planning and goal-setting exercise when the Board “looks back” and “seeks forward”.  Keeping our long-storied club, an amalgamation of two fading clubs back in 1989, at its optimal performance level, is an ever demanding task.  Fund-raising for increased insurance costs, increased travel expenses, equipment needs, implementation of safety protocol, notably related to concussion, the morphing from an amateur to a ‘pseudo-professional’ operation with a volunteer operational crew are a just a few points that go along with the difficulty of retaining and expanding our player base and are all huge challenges.  These challenges do not solely belong to CW, they are challenges for all senior men’s and women’s rugby clubs in B.C.  After thrashing out many ideas and strategies the following are goals for the coming season and years ahead;

1. Help protect players from the risk of recurrent injury and concussion.

2. Improve the standard of rugby at CW as we grow. (To effectively manage the growth of mini/junior programs maintain high standards and inclusiveness. To increase competitiveness of senior programs – developing and monitoring CW fitness standards.  To improve player recruiting and support network. To improve access to winter training facilities.)

3. Build CW “off the pitch”. (To encourage player volunteerism. To improve “cross-club” connections. To increase the fun factor. To build the supporter, volunteer, sponsor base.)

As a footnote to this report, the Club wishes to remind viewers of this site that we are seeking interested people for the positions of Head Coach Men and Technical Director Rugby. Applications will close on June 15th and a committee will announce the successful candidates on July 6th. To view the process, background and skills, expectations and outcomes for CW Head Coach Premiership Menand for CW Technical Director. Resumes of interested applicants can be sent to; Attention – Selection Committee, info@cwrugby.com and don@vitalhealthpharmacy.com

Final musing of the day is related to a rather abysmal showing by the B.C. Bears against England Counties in their opener for the upcoming CRC campaign.  Not to take anything away from a quality visiting side, this pundit did hold out hopes for a better performance than six years ago when Counties defeated B.C. 46 – 7. It was not to be, as the final line was 41 to bagel for the visitors.  I did watch some minutes from the feed and the snippets showed a definite difference between the packs in the tight and the loose and a couple of rather poor attempts from B.C. players in the tackle.  The English backs were much more “pacier” and competent with their attack variation. There were ¾ selections that did not start for B.C. and late replacements on a side that already was, arguably, ‘under-cooked’ were not positives.  So, despite things on paper looking a little better for B.C. this season, facilitation and implementation need to be forthcoming.  On an interesting note was the victory by The Rock over Ontario Blues, 22 – 12 in their CRC season opener.  B.C. take on the defending Champs, Prairie Wolf Pack on July 2nd.

The real rugby on this day was evidently played between the women’s teams from Vancouver and the Island when the Island eclipsed their mainland opposition, 29 – 26 to win the Cup by a mere two points over the two-match series.  Close all the way with punch, counter-punch, in the manner of an Ali Epic!  Congratulations to all players and a special one to the many CW players selected.

We add as a footnote to this, the announced selection of the squad of NSMT players from which the team will be chosen to play Japan on June 11th at B.C. Place, kickoff, 3:00 p.m. (nb).