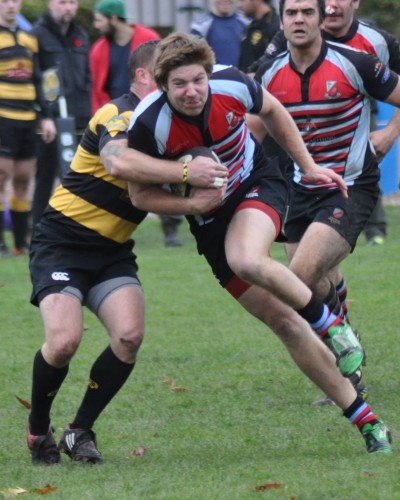 A doff of The Ruggernut’s cap to The Hornets and Tricolors for a very entertaining match at The Park testerday. The contest started with signs of rust, as balls were dropped and decisions were “iffy” but energy was not lacking. Many of the faithful had all eyes on Frisby and an early dropped ball drew attention however the hosts retained territorial advantage and at the 25 minute mark he executed a nice “miss” to spring Mosher who showed a classy pair of heels and goose-steps over thirty meters to open the scoring. Ten minutes later Marshall opened The Hornets account with a penalty. Three minutes ere the half, Mosher earned his brace to end five passes, initiated by a Frisby “loop”, sending the boys to the interval with a 10 – 3 lead.

The second stanza opened with the visitors tying the score with a well-executed series of interpassing and retention to earn the tally. The ball passed through five pairs of hands for Marshall to bull over in the corner and subsequently convert his effort. CW worked play back downfield and following an attacking lineout and drive, Chipsy celebrated his return and Rocher converted for 17 – 10. CW used the ball in hand, Grdic did some good work and Frisby put Morris, on a cameo, over in the corner for the bonus point tally. Nanaimo stiffened and showed great character in crossing a mere five minutes later following many hands, to close the gap to a converted try. Play ebbed to and fro over sixty meters for a good period of time before Kennet Moore was sprung out wide for a well-deserved try. Paul Buckley, cleverly got on the scoreboard for his Kiwi Facebook fans, notching the convert from the sideline, 29 – 15. The match ended with The Hornets having the final say after a long period of retention and drives at the line when the irrepressible Marshall scoring and converting his brace, earning the well-deserved bonus point differential and a personal bag of 17 points. Final score CW 29 – Nanaimo 22.

The 38 second half points scored were a credit to the teams. There were some layoff hiccups but bouquets to both as they sought to play to their strengths and patterns were discernible. Well done to Mossy, as M-I-M and his crew – a game that was fairly and technically officiated, orchestrating an intriguing contest. For The Hornets, Marshall was unquestionably MoM. The pack was energetic and ran hard with #8 being the pick. #18, a second half sub was a huge threat.

For the hosts it was a good showing in a stern test. For the faithful, it was good to see the talent and competitive base expanded. Whether this start will extrapolate to wins at the Premier level remains to be seen however it was all rather encouraging. This pundit liked the aggression of the pack and energy of the backs. It was hard to name a Tricolor MoM but “Chipsy” Lamb earned it by a whisker. In a precise of performances, the forwards toiled hard and set a good basis for the running and passing of the backs. Grdic played a heady, selfless game and newcomer, McLean, although looking short of a trot, has good size and enthusiasm. Heppy was a visible contributor. All the backs were solid and showed reasonable hands and good pace. Frisby’s fifty minutes were plenty to show his skill and experience. Next up, a roadie to the Port, who have won three on the trot, so the test will be even more severe. Bus departs from The Temple at 8:30 a.m., returning around 9:00 p.m. plenty of room for alickadoos. Phone Johno @ 217 9472.