CW vs Burnaby Game in Review 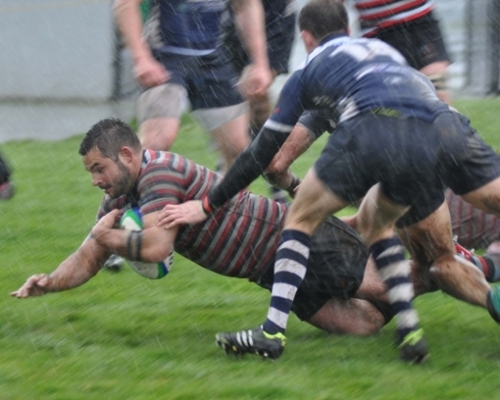 On the most abysmal of afternoons, two CDI powerhouses met to do battle at Windsor Park. Burnaby Lake sought victory so that they could move towards confirmation of Home field status for the playoffs and CW, in a last ditch attempt to make the playoffs.  Burnaby with the form also was after the last scalp in their march of victories against fellow playoff contenders. CW opened the contest with superb stability from the FRF in the set scrums, causing a measure of concern on a couple of occasions when they shunted the huge Burnaby pack backwards.  The war ebbed and flowed with moments of great excitement when both teams made crazy passes to a member of the opposition, there was a real probing burst from Reekie (eventual Man of the Match) from the Lakers and a counter from the "ageless" Goodland, who played with plenty of pep on this day. However the match was about 35 minutes old before first blood went to the Home team with a well-taken penalty by Hearn.  Burnaby returned the favor within minutes when CW was caught with an obstruction play resulting from good pressure.  Pressure was a feature from both sides as passes were spilled or players lost their footing on the greasy surface. After forty minutes there had been no advantage gained except for what night have been an ever so slight territorial and possession margin by The Tricolors.

In the second stanza's early stages, CW attacked from a scrum after a Burnaby knock-on.  The forwards had the numbers at sixes and sevens and drew a penalty, which Hearn converted, to points.  The heavens seemed to miraculously find even more of the wet stuff at this stage and huge credit to the players for attempting to play positive rugby to gain the upper hand.  The battle was not for the weak of heart and the tension could be felt in the bleachers, again credit to the players and the ref for controlling what was no more then mere handbags, the odd "marginal" tackle or some repetitive offside and breakdown issues, none of which took away from the effort and intrigue. It was Armstrong who made a good blind side break, and he saw Thornber looming.  Players around the league are getting to learn about this big prop's gas and he pinned his ears for twenty meters before off-loading to Franklin for the game's first tally.  Franklin was another CW player who had a quality afternoon.

Play was only about ten minutes old at this stage and CW should have put the pedal down however Burnaby did not even blink.  This is a group of guys who have seen a lot of match situations over the past two or three seasons and they managed to rattle the hosts by simply just coming on, causing a CW infraction and reducing the margin to seven points.  Both teams were totally committed but CW appeared slightly unraveled and gave up another penalty which was well taken for a 13 - 9 score line, advantage CW.  Both packs slugged it out with nothing asked or granted and when CW shunted the Burnaby scrum once again at their own forty meters, Adam Cejvanovic, a mountain of a #8, managed to clean and break blind, catching the defense on the open with the wheel of the scrum.  As the defenders clicked to what was on and closed frantically, he off-loaded inside to Doug Breadon  who accepted for a fortuitous, yet worthy try.  The convert put Burnaby ahead for the first time in the match.

Hearn was able to stroke another excellent penalty from the quagmire to tie the score at sixteen. As time ticked on, it looked this might be the final score but magically, the ball came short side from a ruck to CW's Mozac Samson who showed a good turn of speed on the slippery surface and when he passed inside to the support the pass was errant but Captain, Buckley alertly reacted, grubbering the ball to open space over the line and he won the race to seal the deal.  Hearn converted for the final score of 23 - 19 to The Hosts.